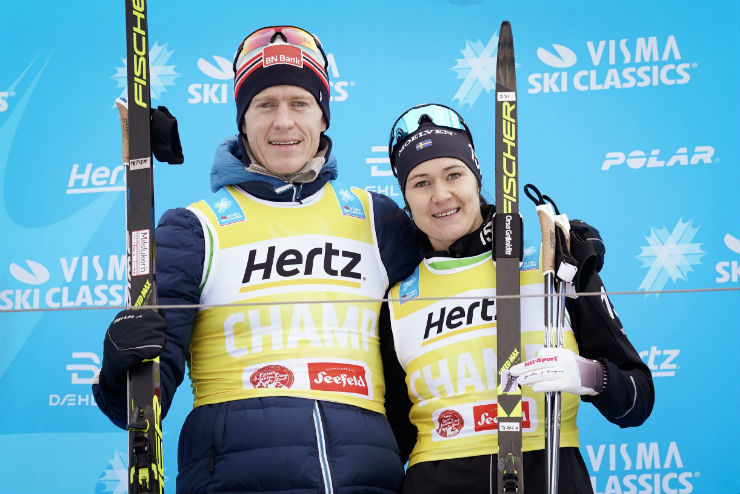 The Visma Alp Trophy competition, combining four of the Alp races in Visma Ski Classics, is now concluded after the final race in Toblach-Cortina was cancelled due to extreme weather. The combined winners are Petter Eliassen and Britta Johansson Norgren, who both impressed with their performances in the first three races of 2019.

Visma recently entered its fourth season as title sponsor, and the Visma Alp Trophy was added as a new element to the competition last season.

The battle for the trophy was fierce, Petter Eliassen and Britta Johansson Norgren both won two races out of three, the first and the last ones. La Diagonela proved to be a tough challenge for both of them as Eliassen came fourth and Johansson Norgren third. Still, their two wins paved the way for their overall victory in Visma Alp Trophy.

Clearly pleased after winning the award, Johansson Norgren emphasised its importance in the competition:

"The Visma Alp Trophy is especially important for the athletes who are unable to compete in all the races throughout the season. It is great to have sub-goals to work towards during the season and it was especially helpful for me to assess my level in the competitions in the Alps."

The winners of the esteemed Visma Alp Trophy are both awarded the prize money of € 5,000. Visma will hand out prize money and awards to the winners after the final event in Ylläs-Levi.

"The competition in first three Alp races has been inspiring to follow. Visma is proud to be connected to a competition where virtues close to us like endurance and team spirit play a major role on the path to success. It is especially fun to follow athletes like Britta and Petter who have such a strong dedication to the sport. " said Visma CEO Øystein Moan.

The skiers will now have a few weeks of well-deserved rest before the next race, Vasaloppet takes place in Sweden, March 3rd.