Visma Finland listed among the best workplaces in Europe 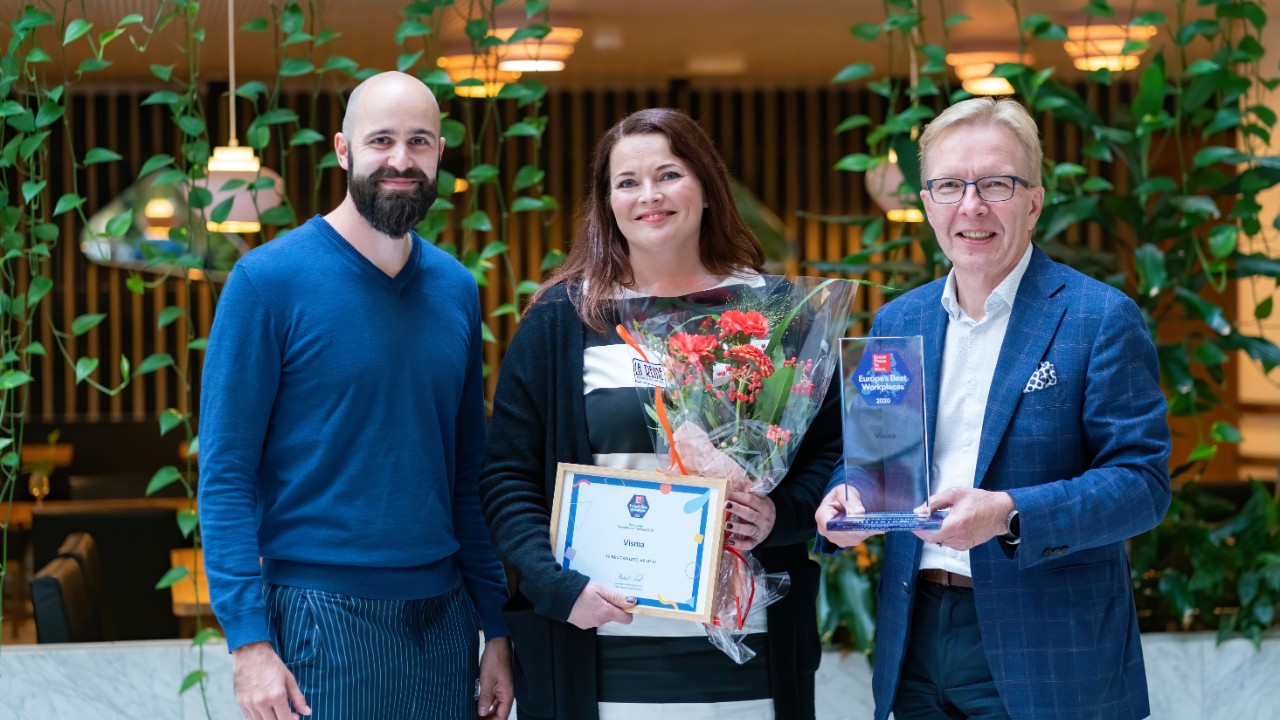 The Finnish Visma companies participated together in the Great Place to Work study for the second time in 2020. Competing in the category of large companies (more than 500 employees) in February, Visma Finland took 2nd place. This result allowed the company to break into the rankings among the best workplaces in Europe, reaching #29 overall.

“Visma has a unique way of building an organisation where we can enjoy the benefits of working both in an SME and a large group. Day-to-day work is done in small or medium-sized business units with their own management, own software solutions or services, and own customer base. At the same time, we are one big family and supported by a stable group”, says Eliisa Valkonen, HR Director at Visma Enterprise Oy. "Our position as one of the best workplaces in Finland has been a significant achievement for us for two years in a row and we are extremely proud of reaching the list of Europe's Best Workplaces as well."

Visma's corporate culture is built around entrepreneurship, openness and community. Visma employees feel that everyone is treated equally, regardless of e.g. age, gender or origin. It is important that employees can be themselves and bring out their own views.

The feeling of being lost in a large organisation is avoided by working in smaller and independent units where trust is key. Visma’s high employee satisfaction proves that this strategy works. By working close to the customer, Visma is able to support the growth of small businesses, SMEs and large organisations. As a result, Visma has become one of Europe's leading software companies.

“The first half of the year showed that our employees have an excellent ability to adapt to exceptional situations. We were able to continue profitable growth both in Finland and internationally and to support customer companies and organisations remotely. I want to thank all Visma employees for this success”, says Juha Mäntylä, Managing Director of Visma Software Oy and a member of the Board of Visma Finland Holding Oy.

About the study:
The Best Workplaces in Europe List

Great Place to Work® identifies the top organisations that create great workplaces in the European region with the publication of the annual Best Workplaces in Europe list. The list recognises companies in four size categories:

To be considered for inclusion, companies must appear on one or more of our national lists in the 19 countries represented on the list (Austria, Belgium, Denmark, Finland, France, Germany, Greece, Ireland, Italy, Luxembourg, Norway, Poland, Portugal, Spain, Sweden, Switzerland, Turkey, The Netherlands, United Kingdom).