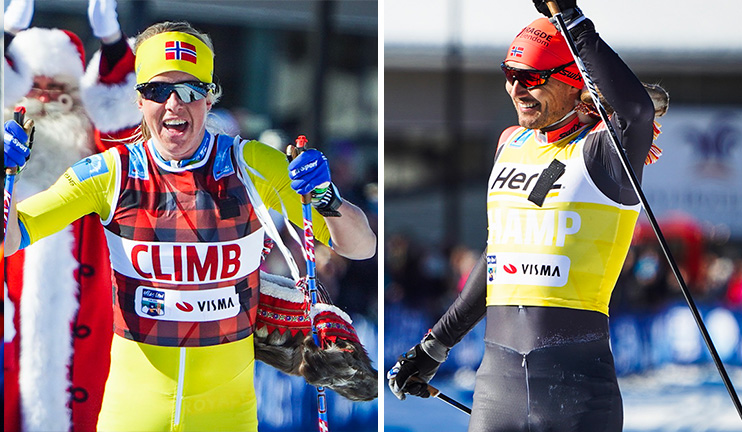 After a season of exciting events all over Europe, the Visma Ski Classics Season IX came to an end in Ylläs-Levi this weekend. Astrid Øyre Slind and Andreas Nygaard both won the race and took home the victory in the Visma Nordic Trophy competition as the overall winners of the last four races of the season.

“Winning the Visma Nordic Trophy is a big bonus in addition to winning the yellow bib. It’s great to have the trophy as a carrot to fight for throughout the season,” said Nygaard after crossing the finish line.

Good conditions characterised the 70-kilometre race in Ylläs-Levi, running through the sloped landscape of Finnish Lapland. There was no stopping Nygaard and Øyre Slind, who also both won the final and the Visma Nordic Trophy last year.

The Visma Nordic Trophy is important to the skiers, as it increases motivation and competitiveness through the whole skiing season, running from November to April.

“The Visma Nordic Trophy gives me the motivation to be a stable and good skier throughout the season. It puts me in a good position to step up for the yellow bib next season. It’s important to have these small awards to fight for along the way, especially for skiers like me, who were unable to attend a couple of races,” said Øyre Slind.

The Visma Nordic Trophy was introduced to create extra excitement for the final stage of the tour. The award, along with EUR 7,500 in prize money, is awarded to the top skiers of the final four races of the competition, all taking place in the Nordic countries.

"Winning the Visma Nordic Trophy is an impressive achievement by Nygaard and Øyre Slind. Their determination, ability to set goals and achieving them, combined with the incredible support of their teams, is inspirational and something we can learn a lot from in business," said Øystein Moan, CEO in Visma.

Click here to see the video interviews of Nygaard and Øyre Slind.