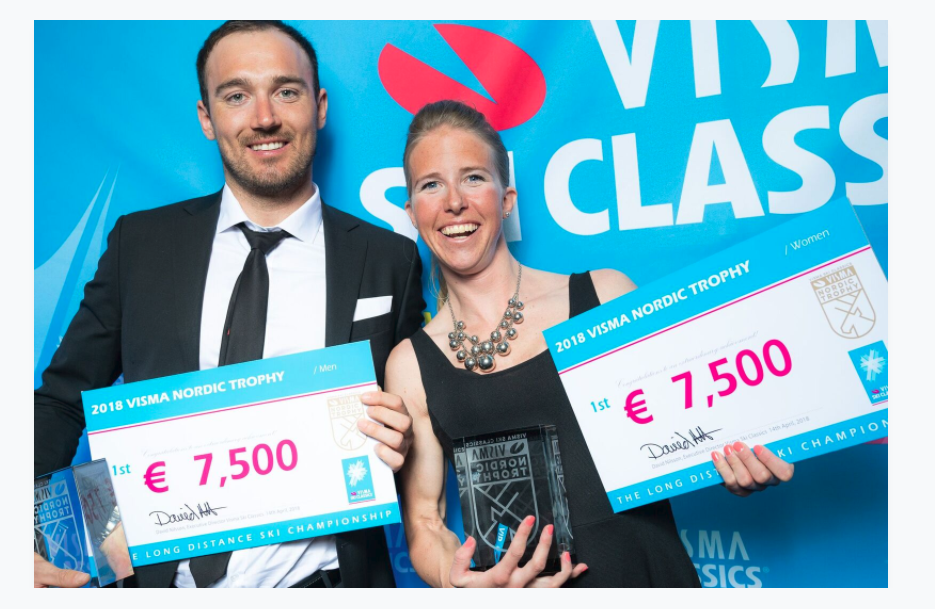 The Visma Ski Classics tour was brought to a thrilling end in Ylläs-Levi last weekend. Astrid Øyre Slind and Andreas Nygaard came first in Ylläs-Levi, and also took home the victory in the Visma Nordic Trophy competition, awarded to the top skiers of the final four Nordic races.

The skiers have been competing side by side for the last five months in one of the world’s toughest long-distance ski championships, Visma Ski Classics. The final took place in warm spring weather, characterised by an incredible climb competition and an exciting sprint towards the finishing line.

Prestigious award for the athletes

– I’m so happy to finally win, a joyous Øyre Slind declared after the finish. Winning the competition is a great feeling!

Winning Ylläs-Levi secured her the Visma Nordic Trophy – a prestigious award for the athletes. The competition was introduced to create extra excitement for the final stage of the tour last year. The award, along with EUR 7,500 in prize money, is awarded to the top skiers of the final races of the competition, all taking place in the Nordic countries.

Nygaard believes the element of having the Visma Nordic Trophy competition as part of the tour increases motivation amongst the athletes:

– The more competition and prizes to fight for, the easier it is to keep up the tempo and motivation throughout the season. I’m really pleased to win the Visma Nordic Trophy after four important races, each one difficult in its own way. I’m looking forward to more competition next season.

Strength and resilience required to win

This year, Visma CEO Øystein Moan joined Ylläs-Levi as a competitor and got to experience the hardship of the competition first-hand. High-spirited after the race, the CEO applauded the efforts of the winners:

– Winning the Visma Nordic Trophy requires the athletes to push themselves to the limit and beyond, showing not only strength and resilience but character and team spirit, values that both Visma and the athletes identify with and believe in.  We’re all looking forward to the next season starting at the end of the year.

Visma Ski Classics is a long distance ski championship. This season, it consists of 11 of the world's most prestigious and traditional ski events, like Marcialonga in Italy, Vasaloppet in Sweden and Birkebeinerrennet in Norway. 28 pro teams and 50.000 amateur skiers are competing in the same races. The events are televised in more than 70 countries around the world with more than 20 million viewers. Visma Ski Classics is operated by Ski Classics AB owned by Vasaloppet, Birken and W Sportsmedia.