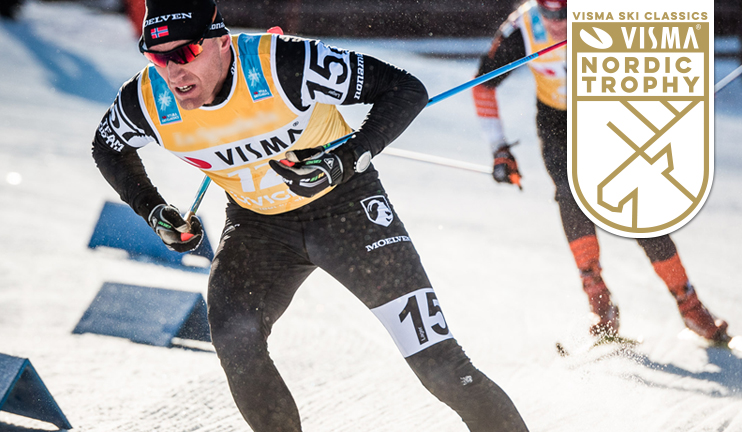 Visma, the title sponsor of Visma Ski Classics, is the the main partner of Visma Nordic Trophy’s final race Ylläs-Levi in Northern Finland.

Visma Nordic Trophy is a competition including the final five Nordic events in Visma Ski Classics. The competition ends with the 67 km classics race Ylläs-Levi in Northern Finland April 8.

- As title sponsor for Visma Ski Classics, we are pleased to be the main partner for Ylläs-Levi and find the race to be a great finale of Visma Nordic Trophy. Finland is an important market for Visma and we have looked forward to support this event, says Øystein Moan, CEO in Visma.

- We are honoured to have Visma as the main partner for Ylläs-Levi, which fortifies our brand and the event as a whole since the company is already the title partner of the entire cup. Visma is a great brand to be associated with, and together with them we can make a race that will be remembered for years to come. Not just a race but an event with elegance, quality and a lot of fun, says Teemu Virtanen, Race Director Ylläs-Levi.

Prize money to be handed out after Ylläs-Levi

Visma Nordic Trophy standings depends on the amount of "yellow bib" Champion points collected through the five Nordic events. The top three male and female skiers with highest points after the final race Ylläs-Levi will be awarded. Visma will hand out prize money of 35.000 Euro.

- Visma Ski Classics is among the toughest challenges within organized skiing. To win Visma Nordic Trophy requires strength, teamwork, and character, and the ability to endure adversity and rough environments. These are all virtues and values we/Visma identify with. We look forward to award the top three male and female skiers after finish in Levi, says Øystein Moan, CEO Visma.

About Visma Ski Classics
Visma Ski Classics is the long distance cross country ski championship. This season it consists of 13 of the world’s most prestigious and traditional cross country ski events, like Marcialonga in Italy, Vasaloppet in Sweden and Birkebeinerrennet in Norway. 28 pro teams and 50.000 amateur skiers are competing in the same races. The events are televised in more than 70 countries around the world with more than 20 million viewers.