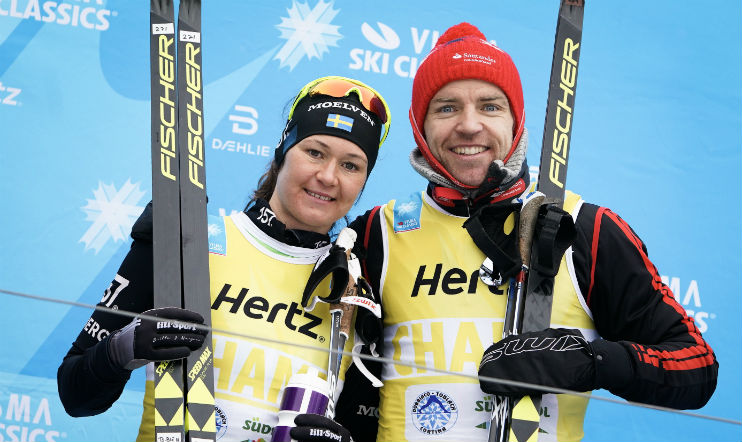 The Visma Alp Trophy competition culminated in Toblach-Cortina this weekend after an intense month of races. Britta Johansson-Norgren and Trond Asle Gjerdalen went all the way to the top and sealed their victory in the prestigious competition.

The winners of the Visma Alp Trophy will receive EUR 5,000 each, and are decided by accumulating champion points from four Visma Ski Classics events taking place in the Alps; Kaiser Maximilian Lauf, La Diagonela, Marcialonga and Toblach-Cortina.

Toblach-Cortina took place in snowy winter conditions with fresh snowfall during the start of the race. Johansson-Norgren and Gjerdalen both won the sprint finishes and were announced winners of the Visma Alp Trophy after crossing the finishing line.

Øystein Moan, CEO of Visma, was impressed with the athletes after the race, which started out slow for both the female and male skiers.

– The skiers have competed side by side in four tough races during the last month. The winners have made an impressive effort throughout the competition and towards the finish, and we are proud to connect our brand with their teamwork, strength and character, said Moan.

After winning the first two races in Seefeld and St. Moritz, it seemed both Gjerdalen and Johansson-Norgren were bound for victory in the Visma Alp Trophy competition. Johansson-Norgren has taken first place in all four races, but it wasn’t a straight run for Gjerdalen who missed out in Marcialonga, coming in fourth. Still, the victory in Toblach-Cortina secures his place as the male winner of the competition.

The Visma Alp Trophy awards will be handed out after the final race of the Visma Ski Classics competition in Ylläs-Levi, Finland April 14th.